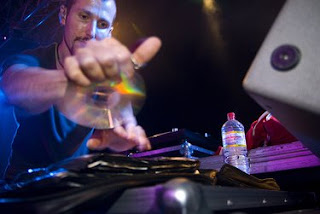 Josh Wink (born Joshua Winkelman in 1970) is an DJ, label owner, producer, remixer, and artist and he hails from Philadelphia,Pennsylvania in the United States. He was a pioneering DJ in the American rave scene during the early 1990s. Wink was one of the most prominent champions of the Acid/Tribal house movement in the United States and in 1990, Wink founded his own successful record label called Ovum Recordings with King Britt. In 1995, he released several hits, including "Don't Laugh," "I'm Ready" (which hit number one on the U.S. Hot Dance Club Play chart) and "Higher State of Consciousness," which topped the dance charts in Europe. In 1996 Wink released two albums: A Higher State Of Wink's Work, which is a compilation of Wink's early 12 inch singles, and Left Above the Clouds, under the name Winx. In 1998, he released the Herehear album (with Ursula Rucker and Trent Reznor) and the 20 To 20 EP appeared in 2003.

In addition to his artist albums, Wink has released many DJ mix albums, three of his most well-known being Volumes 1, 2 and 3 of the Profound Sounds series. Profound Sounds Volume 3 is notable in that it contains Wink's popular remix of the Radiohead song Everything in Its Right Place, which Wink was able to license exclusively for his album through negotiations with Radiohead themselves. His song "Higher State of Consciousness" was also featured on the popular video game Grand Theft Auto: Liberty City Stories. He has had many club hits such as "How's Your Evening So Far?" (with Lil Louis) and "Superfreak (Freak)" and has also gained a lot of attention for his remixes of FC Kahuna, Paul Oakenfold, Moby, Towa Tei, Ladytron and Depeche Mode, among others. Josh Wink has recorded releases using many aliases such as - Wink, Winc, Winks, Winx, The Crusher, E-Culture, and Size 9.

Two weeks ago Josh got behind the decks for the BBC and did a crazy Essential set.

Don't forget that Josh Wink's new album, When a Banana was just a Banana, is out now!

Also make sure to pick up his underrated second album Herehear (Highly Recommended)!

Grab his first album Left Above The Clouds!