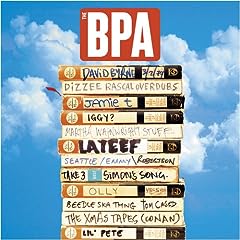 Norman Cook is at it again and this time he is using the moniker `The BPA` (The Brighton Port Authority). The title of the album may not just be a quote from "Jaws" but a statement about how many people were involved with the album as every track on the debut, "I Think We`re Gonna Need a Bigger Boat", features a different vocalist. Most of the guests are relative unknowns outside of the British music scene although having David Byrne and Iggy Pop on your album doesn`t hurt.

Cook does a great job of getting something a little different from his vocalists and sometimes really surprises the listener with the final results. The album is pure pop with catchy choruses and foot tapping beats and melodies. Iggy does a great job on the first track `He`s Frank` as he dryly sings / talks. Tracks like `Local Town` Featuring Jamie T and `Toe Jam` Featuring David Byrne and Dizzee Rascal (an unlikely but very interesting pairing) are some the albums silliest (lyrically and musically) tracks. Then there`s `Jumps the Fence` featuring Colin Mockasin and `Seattle` featuring Emmy the Great - more down tempo and serious and could almost be on a completely different album. My favourite track on the album, `Spade`, features Martha Wainwright and sounds like a classic 70`s reggae track (which is a good thing).

There should be a little something for everyone as the album is a mash of rock, soul, and dance . If anyone has seen his Brighton parties in the past you know one thing Norman can do well is have fun and for the most part, that is exactly what the album delivers. Norman Cook has said in interviews that, with `The BPA`, he is forever retiring his Fatboy Slim moniker. This may or may not be a bad thing (I love early Fatboy Slim) but as long as Cook keeps making music, I will keep listening. If this is a sign of how the music of 2009 will be, we are in for a really good year.