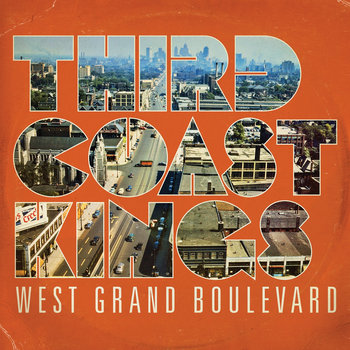 If you love a funky beat like I do then you will love the Third Coast Kings. Full of soul and head bobbin' rhythms this is a fantastic album from start to finish.

Recorded in Ann Arbour with the full band in one room, a minimum amount of effects, processing, and microphones and mixed by much respected funk producer Nate Goldentone, West Grand Boulevard is the awaited new album by Detroit finest deep funk combo Third Coast Kings. Their 2012 self titled debut album made a global impression upon its release, the Kings were invited to Japan to perform at Fuji Rock Festival and gained fans all over the world such as Craig Charles (BBC2), Kenny Dope and Dj Muro. Now the guys are back with a mission: to carry the torch of Deep Funk heritage across the planet.

Named after one of the city's most wide-reaching thoroughfares, West Grand Boulevard is that album. Detroit is a city of music and muscle, and this is the sound it makes when it flexes. Every track on the album is inspired by the sights, sounds, smells and history of the city. Funky instrumentals range from gas-guzzling burners like Lead Foot, to high strutting cruisers like the title track, West Grand Boulevard. Punch out of work at your back-breaking job to High Tops, then suit up for the club with Errol Flynns. The track Jelly Roll almost has a European R&B sound while maintaining its Detroit influence. Ice Cream Man is an atmospheric funk caravan, dishing out sweet horn licks, smooth basslines and an organ solo straight from church. The Kings' alternating vocal duo are back as well with the sultry Michelle "The Belle" Camilleri calling all to the dancefloor with her party starter Just Move. Acting as James Brown while the Kings play the part of the JBs, charismatic singer Sean Ike displayshis range, telling the tale of legendary hero Jack Johnson in the American anthem I'm A Man,and then takes it to the bedroom with the straight up baby-maker Birds & Bees.

Looking to present this history lesson/house party in a raw and real manner, the group enlisted engineer Jim Roll and producer Nate Goldenton to capture the music in the most authentic (and these days, difficult) way possible. This is how Detroit did it in the '60s and'70s, so get to work on that time machine, or just let the Third Coast Kings take you on a vintage tour of West Grand Boulevard… Watch out the Kings are back! "