Not much new to report in the world of me but I am very excited to hear that the Chemical Brothers have a new release coming out soon. 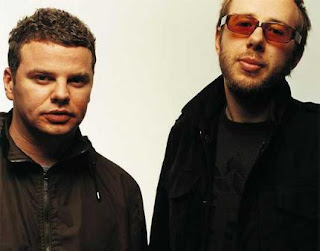 Following their fourth consecutive UK number 1 album, the double GRAMMY® Award winning Push The Button, The Chemical Brothers return with their sixth long player, set for release on June 19th 2007. We Are The Night is The Chemical Brothers finest record yet, twelve tracks of psychedelic warehouse party acid music, euphorically melodic and as uncompromising as their retina scorching live shows.

Recorded undercover of darkness in a bomb proof bunker in South London, We Are The Night is a route map through modern psychedelia; a derailed rollercoaster that barrels the listener onto a journey that moves seamlessly from frenetic percussion workout that threatens to splash out of the speakers, to metronomic pulses that sound like the kind of music that gets played out at some kind of future disco populated entirely by robots; from the wheezing groans of modular synthesizers that sound like they’ve been left out in the rain to die, to hallucinogenic public service announcements about salt water fish. All the while, disembodied robo-voices boom out mind control commandments as guest vocals weave in and out of tracks like previously undiscovered instruments…

Effortlessly evoking the dancefloors of Manchester and Minneapolis in the early '80s and London of 2007, We Are The Night is The Chemical Brothers at their very best. Infectious from the ominous opening through to the gorgeous dying embers, the record features some of their most mind-blowing music to date, a massive step up for the duo in terms of both production and sound. The album builds on the band's immense back catalogue and reaffirms them as true pioneers of electronic music, a band who are consistently hugely successful both critically and commercially.

We Are The Night follows on from 2005’s Push The Button, which featured the huge single “Galvanize”. As is often the way with Chemical Brothers records, it achieved a life of its own, soundtracking everything from South American raves to the London's Notting Hill Carnival and all points in between. The duo recently sneaked out an album preview (the anonymously released ultra limited “Electronic Battle Weapon” 8 & 9). Much of the record has been tested out on dancefloors across the world during the past twelve months.

We Are The Night - the soundtrack to the summer just arrived...

Look out for the first single "Do It Again" Featuring Ali Love release date to be announced soon.

03. All Rights Reversed (Featuring The Klaxons)

The Chemical Brothers have exclusively announced that they will be headlining the Other Stage at the Glastonbury festival this year. A US tour will follow in September.